The Augustinian Recollects have enjoyed a long and wonderful history at Cristo Rey. It was through the vision of this religious community that permission was granted for Fr. Jesus Domench, O.A.R. to begin ministering to the needs of the Hispanic Catholics in the north-eastern section of Los Angeles.

The first Masses were celebrated in a small rented house on Baywood Street. When the number of faithful attending Masses was too large for the house, Mass was moved to the patio area under a tent. Later, Sunday Masses were held in a local dance hall on the corner of Chevy Chase and Brand, and eventually at nearby Holy Trinity Church. 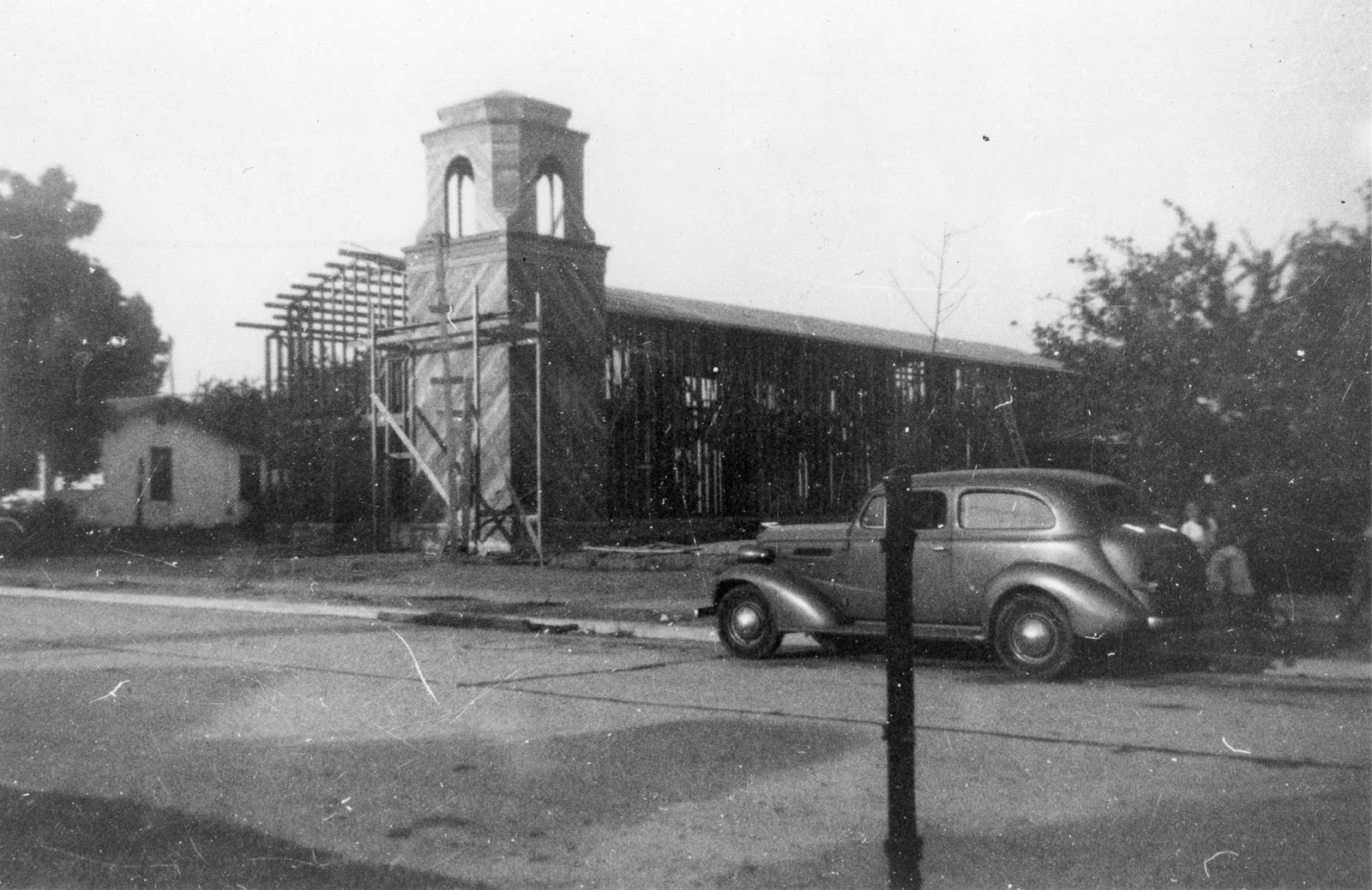 A meeting was held on a Sunday afternoon for residents of southern Glendale and Atwater, and this was the beginning of the Glendale Fiesta Association. Also present was a group of women from the same area who had formed a group, Confederacion Feminina Catolica Mexicana, under the leadership of Mrs. Frances Ramirez. The group's goal was to obtain a Spanish-speaking priest to serve in the community and eventually build a church of their own.

It was during this meeting that Lt. R.E. Warwick of the Glendale Crime Prevention Bureau and Mr. Ray Lobleto, leader of the Aztec Boys Club, suggested that a fiesta be held to support both groups. Everyone present at this meeting was enthusiastic about this joint venture and called for another meeting to be held at El Ruby Cafe, which was operated by Salvador and Maria Velasquez.

The first meeting of these groups was held on the feast of Christ the King, and for this reason, the members of the Confederacion decided that the church to be constructed in the future should be dedicated in honor of Christ the King. Thus they chose the title “Cristo Rey,” which is so dear to the Hispanic community.

The first “Days of Verdugo” was held in September of 1938 with Consuelo Velasquez crowned as queen following a parade down Brand Boulevard. Over the years, the excitement for the fiestas grew as people realized the needs to be met. By 1941, the Catholics of southern Glendale and Atwater had raised $4,000 to purchase four lots on Perlita Avenue as the site for a new church.

It was difficult time with limited funds and resources during the Second World War. There were supply shortages and other troubles in obtaining lumber and building materials. The parishioners had to be dedicated and vigilant while the church was being built. For example, Mr. Teodoro Estrada would sleep in his car behind the church construction site, accompanied by the family dog, to guarantee that none of the lumber for the new church would be stolen. Only once did someone attempt to rob the lumber, but Mr. Estrada and his dog were able to apprehend the culprit.

Numerous activities were held to meet the expenses for the construction, including dinners, dances, jamaicas and fiestas. The Annual Queen Coronation Dance was a festive event that brought the community together and raised funds to finish building the church.

It was a joyous occasion when Archbishop John J. Cantwell solemnly dedicated Cristo Rey Church on March 12, 1944. The early parishioners were proud of their accomplishments and the faith that had sustained the community.  They knew that God would bless their sacrifices and allow their parish to grow. That same year the Rectory was built as a residence for the Augustinian Recollect priests serving in the parish.

Throughout the years, additional furnishings for the church were purchased, especially the beautiful statues that adorn the interior. The Stations of the Cross and various images of our Blessed Mother were bought with donations from parishioners, and many were brought from Spain whenever Augustinian Recollects would be returning to the United States.

Soon after the construction of the church, the Augustinian Recollects dreamed of a statue of their patron, St. Augustine, for the exterior of the church and, in 1954, the marble stature of St. Monica was installed in front of the Rectory.

The mosaic of Our Lady of Guadalupe was blessed and installed on April 11, 1976. Mr. and Mrs. Feliciano De Leon were the impetus behind this special project and invited other members of the parish to contribute. Prior to the installation of the mosaic, parishioners who donated to the project had the chance to write their names on the back side of mosaic. 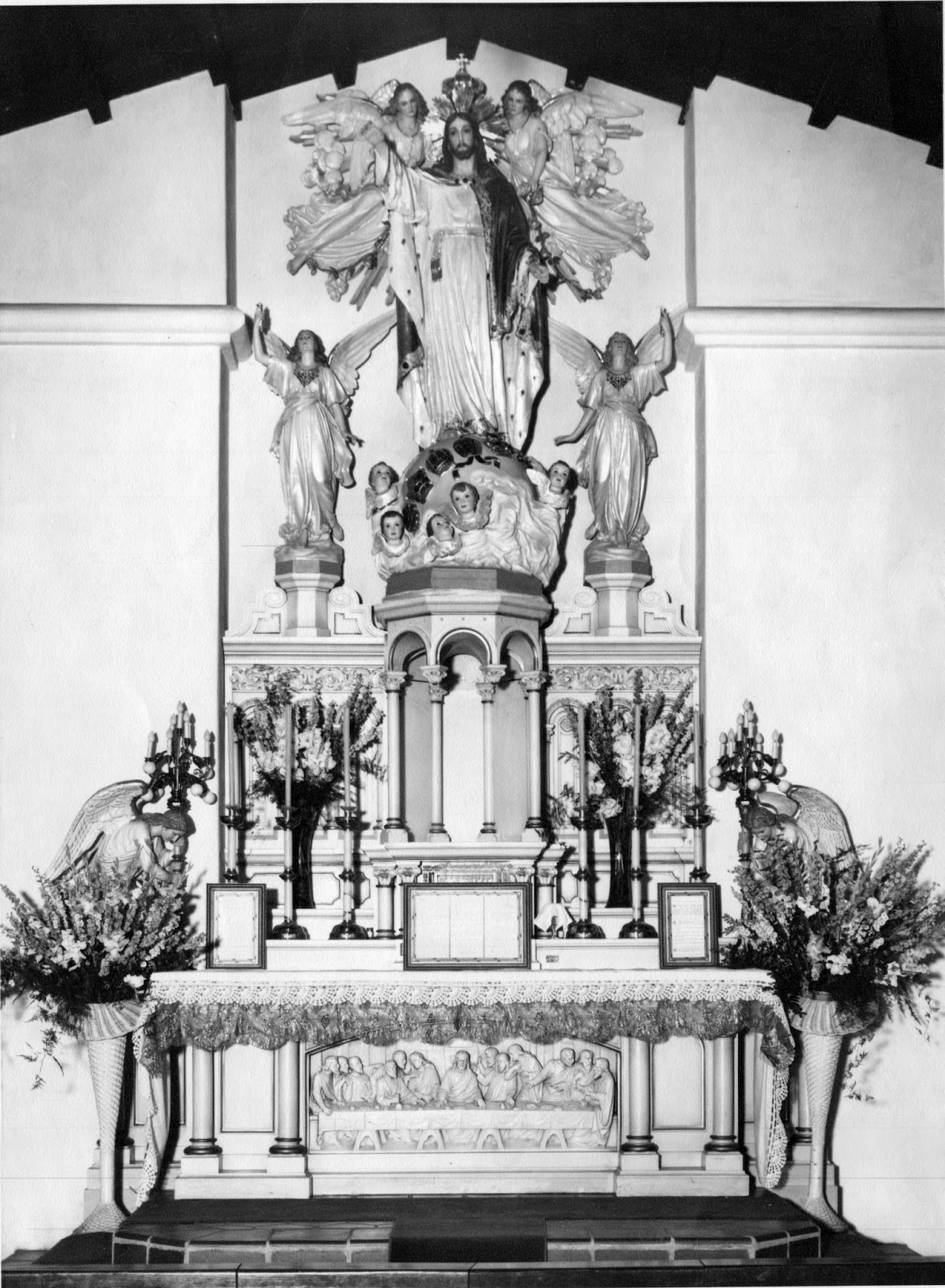 In later years, additional property was purchased on LaClede for a much-needed parking lot, and it was on this same site that a parish hall was built in 1961. The construction of the parish hall found the parishioners responding with their usual generosity, especially when they realized that it would serve as a Catechism Center for the young members of the parish.

Today the parish hall serves to bring our community together for a variety of events including Sunday breakfast, meetings and performances by the parish theatrical group, “Cristo Siempre.” The most important function of the parish hall continues to be the education of our young people in the Catholic Faith and Sacramental Preparation. Religious Education classes are held there six days each week in both English and Spanish sessions.

The feast of Cristo Rey in 2008 was enhanced by the blessing of the new bell for the church tower. Early photographs of the church with a bell in the tower prompted interest in returning a bell to the tower and removing the speakers from the carillon system. The “Bell Project” became a community effort. The children in the Religious Education classes contributed their coins, knowing that their gifts would be part of something they could recall in the future.

The work that Fr. Domench began has continued throughout the years by numerous Augustinian Recollects, working with the dedicated parishioners of Cristo Rey. This little community that began with the status as a “mission” of neighboring parishioners continued to grow in numbers and in a vibrant faith.
Email ThisBlogThis!Share to TwitterShare to FacebookShare to Pinterest
Home
Subscribe to: Posts (Atom)