I received a wonderful gift from my brother – a pilgrimage to Portugal, France and Spain which took place from Oct. 17 – 26, to celebrate my 45th anniversary with the Order of Augustinian Recollects.  We were three priests and a group of 35 pilgrims.  We arrived in Lisbon, Portugal and traveled to Fatima, where I had the privilege to be the principal celebrant for our Mass there to begin our pilgrimage. 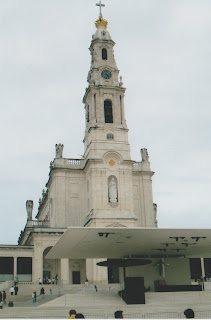 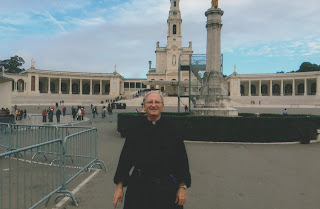 It was wonderful to be there to celebrate the 100th anniversary of the apparition of Our Lady to the three young children.  Afterwards we participated in the Rosary and the candlelight procession. 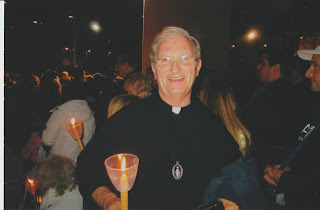 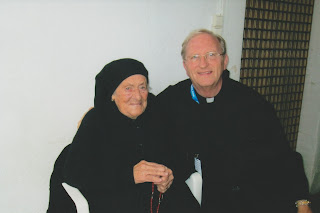 We returned to Fatima the following day and celebrated Mass with other pilgrim groups at the Chapel of the Apparitions.  We prayed in the main basilica where Saints Jacinta and Francisco are buried along with Sister Lucia, the third visionary. 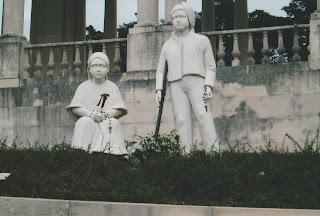 The morning of the 20th we visited the birth places of the children outside of Fatima as we traveled to Coimbra.  There we celebrated Mass at the Carmelite Convent, where Sister Lucia lived until her death in 2005.

From there we left Portugal and traveled to Santiago de Compastelo in Spain, the burial place of St. James the Apostle.  The “Camino” is a very popular experience for pilgrims.

We celebrated Mass there and were privileged to have the “Butafumiero” at the end of the Mass.  This is a very large censor (weighing about 400 pounds) that is attached to very strong rope and swings from side to side (ceiling to ceiling) with eight men controlling the rope.  The incense billowing through the air is a sight to see.  (You can see the “Butafumiero” in action in the video below.)

On the morning of the 21st we celebrated Mass in the Chapel of Our Lady of Pilar there before leaving the Galicia region and traveling by bus to Astorius and to the town of Santander.

This was a free evening.  About 15 of us took a nice walk and stopped in the Casino which is a very prominent building.  (I placed 5 euros in the machine and won, much to the delight of everyone.  I then treated all of them to gelato.)

We traveled to France on the 22nd to the village of Lourdes and joined the candlelight procession there. 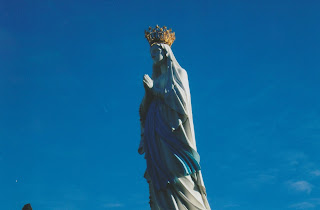 The following morning we attended Mass at the grotto where Our Lady appeared to St. Bernadette.  I was invited to be one of the principal concelebrants.

The rest of the day was spent at our own leisure.  We had the opportunity to visit the baths with the holy water and in the afternoon it was a wonderful experience participating in the procession of the Blessed Sacrament with the sick in wheelchairs and on stretchers.  I was able to escort one lady with her wheelchair. 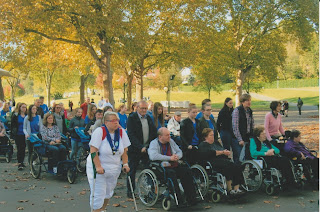 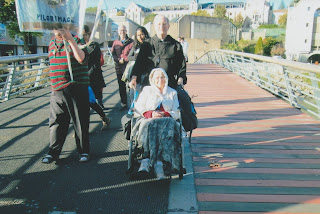 That night we returned to the basilica which was just a few blocks from our hotel and joined the candlelight procession.  (The evening processions in Fatima and Lourdes are very impressive and during the praying of the Rosary, everyone raises their candles at the Glory Be and sing the Marian hymns with such enthusiasm.)  I was able to treat myself to Quiche for lunch and Crepes for an afternoon snack.

We left France on the morning of the 24th and traveled back to Spain with tremendous views as we crossed the Pyrenees mountain range.  The scenery was beautiful with the mountains and the trees which were just beginning to change colors.  Our destination was the Abbey of Montserrat, Spain.  (The road to the Abbey winds through the mountain range and the name “Montserrat” is where we get the name for a “serrated knife” as the mountains are so rough and jagged.) 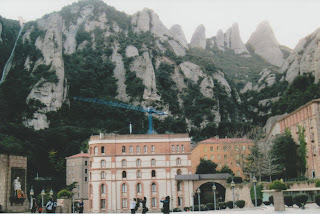 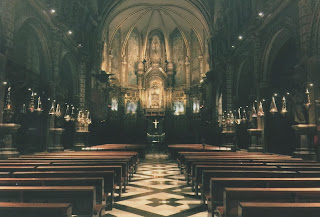 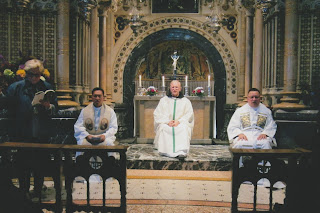 When I arrived in my room, there was a surprise – a chilled bottle of champagne.  I inquired of the other two priests and several pilgrims if they found a surprise in their room – they hadn’t.  I was able to bring the champagne to dinner and everyone had a chance to share and to offer a toast.

On the 25th we went into Barcelona for Mass at the cathedral and after lunch, we visited the Sagrada Familia Basilica which is the inspiration of Antoni Guadi – this is a work in progress. (It would be worth visiting www.sagradafamilia.org to learn more about its history.)  It is scheduled for completion in 2026. 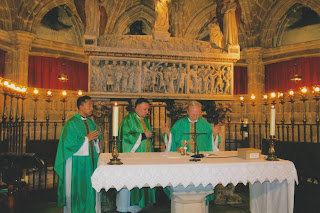 We returned to the Abbey in Montserrat for dinner and to prepare for our journey back to the United States.  We were blessed with fantastic weather all throughout our trip and a wonderful spirit among the pilgrims.  This was a trip of a lifetime!
Email ThisBlogThis!Share to TwitterShare to FacebookShare to Pinterest
Newer Post Older Post Home